Bureau on 19 November 2014 at the PES headquarters 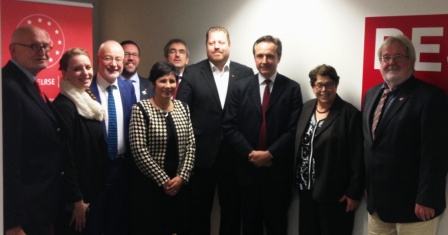 At the USLRRE Bureau meeting, held on 19 November 2014 at the headquarters of the PES in Brussels, the Bureau discussed on the Transatlantic Trade and Investment Partnership (TTIP) and the Canada – EU Trade Agreement (CETA) with Bernd LANGE, MEP, Chairman of the Committee on International Trade of the European Parliament.

Marc TARABELLA, MEP, Mayor of Anthisnes, Secretary General of the USLRRE and Frédéric VALLIER, Secretary General of the Council of European Municipalities and Regions (CEMR) reported on legislative projects of the European Union relevant to local and regional government in the new legislative period of the European Parliament. Furthermore the Bureau discussed challenges of migration in the EU.