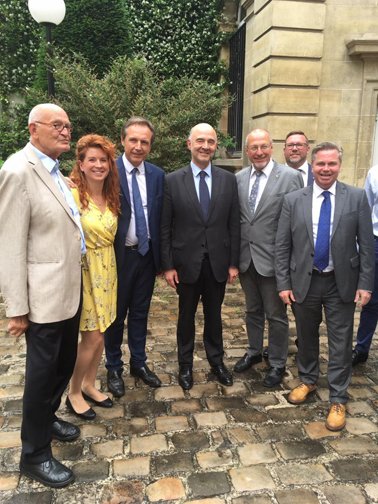 On 1 June 2018 the Bureau of PES Local met upon the invitation of the FNESR in the Headquarters of the French Socialist Party in Paris. At this meeting the executive Bureau of PES Local was elected. Christophe ROUILLON (France), Mayor of Coulaines, Conseiller général of Sarthe, Vice President of the Association of French Mayors, First Vice-President of the PES-Group of the Committee of the Regions, was unanimously elected as PES Local’s President, and Marc TARABELLA (Belgium), Member of the European Parliament and Mayor of Anthisnes, as Secretary General. In the afternoon a workshop of PES Local and FNESR took place on « Strengthening Cities and Municipalities – For a Europe of Solidarity and Social Cohesion». Delegations of the organisations of social democratic and socialist local and regional representatives from thirteen European countries took part in the workshop. Speakers of the meeting and the workshop included
Olivier FAURE, First Secretary of the French Socialist Party (PS)
Pierre MOSCOVICI, EU Commissioner for Economic and Financial Affairs
Maria João RODRIGUES, President of the Foundation for European Progressive Studies (FEPS), Vice-President of the Group of the Progressive Alliance of Socialists and Democrats in the European Parliament
Maria da LUZ ROSINHA, National Secretary  of the Portuguese socialist Party for Municipalities and Local Autorities, Member and Vice-Chair of the  Committee on Environment, Spatial Planning, Decentralization, Local Government and Housing of the Portuguese Parliament
Hermano SANCHES RUIVO, Councillor of the City of Paris in charge of European Affairs

Resolution «Strong municipalities for a Europe of Social Cohesion and Solidarity»

Resolution of PES Local on the Situation in Turkey